There's a few tricks to solving Kakuro which make things easier - we've got them all!

An empty square that has all its neighbouring squares (either column or row) filled in can easily be solved. Simply add together the corrsponding neighbouring values and then subtract the total from the clue. The remaining value is the answer for that square. 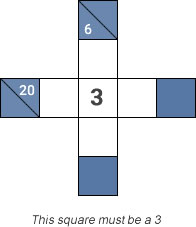 This technique works by picking a run and performing a cross reference on every square along it, weening out combinations until you have only 1 left.

Knowing that this run has only 1 combination, we can now fill in this section of the puzzle.

In this example, we can deduce that the square outside of the blank 2x2 area shown must be a 3, we can do this using the filled area technique.

Using this technique you can eliminate any number combinations which would lead to certain patterns of numbers (as shown in the examples).

The pattern shown the examples, with the numbers on the top row being the same as the bottom row (albeit in a different order), can never occur anywhere on a valid Kakuro board as it would lead to more than 1 solution.

If you swapped the top and bottom rows in the examples, the numbers would still add to the same clues, but would yield a different solution to the puzzle.

Bearing in mind that a proper Kakuro puzzle has only 1 solution, you should avoid any numbers which would create the patterns seen here.

< Back to play Kakuro